A while back we announced that SGL Entertainment had acquired MEET ME THERE, a film festival favorite. And now we are pleased to announce that this creepy psychological thriller is now available worldwide on DVD and Blu-ray with all new Artwork. The Film was screened at Filmorama, Sunscreen, Houston Beta, Innovative, Feratum and Bruce Campbell’s Horror Film Festival among others.

SYNOPSIS: A journey of self-discovery becomes a quest for survival as Ada (Lisa Friedrich, Least Favorite Love Songs) and Calvin (Micheal Foulk, Zero Charisma) encounter the darkness of the past and the unexplainable evil of the present in a town where the only visitors are the ones who’ve come to die. Featuring Dustin Runnels (WWE’s Goldust) and Jill Thompson (Scary Godmother), this intense character study and exploration of sexual trauma will have you covering your eyes and keep you guessing until its final minutes.

Watch the All New Official Movie Trailer for “Meet Me There”

Directed by Lex Lybrand (Summer League), written by Brandon Stroud (Seven Hill City) and based on the real-life stories and the nightmares of Destiny Talley. The movie is Now Available on DVD and Blu-ray via SGL Entertainment, along with our partners MVD Visual. Look for it at Best Buy, Fye, Kmart and other Fine Retailers. And, coming soon to Cable TV and VOD. 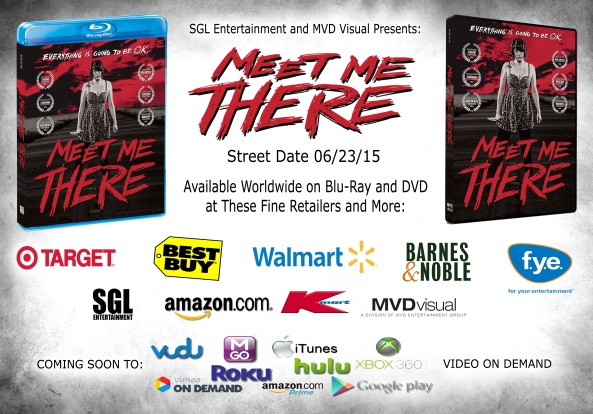 MEET ME THERE
An intense character study and
exploration of sexual trauma
that will have you covering your
eyes and keep you guessing
until its final minutes.
A Film Festival Favorite
Directed by Lex Lybrand
Format: BLU-RAY / DVD
Release Date: 06/23/15

For More Info on “Meet Me There” Go To: