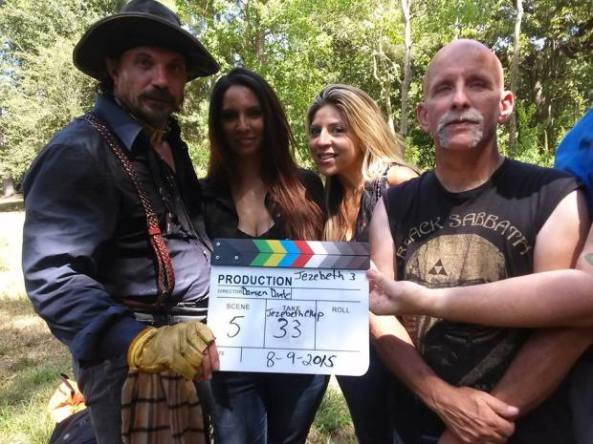 Outlaw Movie Studios is pleased to announce that they just launched an INDIEGOGO Campaign for their epic gun blazing western adventure film Jezebeth 3: The Guns of El Diablo. We are looking to raise $10,000 to cover production and post-production costs. We will be shooting on a RED Epic Dragon in glorious 6K and our backdrop will be the beautiful Buffalo, Wyoming. The funds that we raise will go towards equipment rentals, travel expenses, post-production costs and creation of an epic soundtrack.

SYNOPSIS: Jezebeth Wyck, Cyanide Wyck, Jonah Whitewood and the telekinetic child Abigail, all return in this third installment of the Jezebeth Movie Franchise. The movie opens in 1875 where we see The El Diablo Gang all hung for their crimes. In 2016, they will ride again. The story quickly jumps from 1875 to the Present Day when the El Diablo Gang, after 140 years in Hell, are given a Pardon by The Devil. The outlaws are freed from Hell and suddenly now they find themselves in the Present Day and headed for a battle of the Century. The bloody violence and gun shooting is overwhelming in this epic Modern Day Western.

Jezebeth 3 The Guns of El Diablo will be Released in Theaters as well as Blu-ray, DVD, Comcast Cable TV and all of the Top VOD Platforms Including iTunes, Google Play and Amazon Prime via SGL Entertainment along with their partners MVD Visual and Indie Rights Movies.